Stretching the shoestring -- The New Quarterly 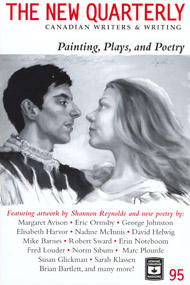 As another in our irregular series about little magazines we love, we present The New Quarterly.

Started more than 20 years ago with $3,000 ($1,000 donated by each of Edna Staebler, Farley Mowat and Harold Horwood), The New Quarterly has had the usual ups and downs of a small literary magazine. But it has always enjoyed the loyalty and help of its friends, particularly the original Editor, Peter Hinchcliffe and the current Editor, Kim Jernigan, who has been with the magazine since almost the beginning. Jernigan's long and effervescent service should long ago have earned her great recognition.

The magazine had always distinguished itself from other literaries by its passion for writers and writing, and by its self-described sense of fun. (This will reach its logical extension when the magazine publishes a whole Comedy issue next summer.) The editors have prided themselves on reading and responding to every fiction submission received. The magazine also spends some of its precious capital and pages on publishing writing about the art and science of writing. Since everyone (and we mean everyone) works for nothing or next to it, this is all a remarkable act of faith and commitment.

Published out of donated space at St. Jerome's University (an affiliate of the University of Waterloo), using miscellaneous scrounged equipment, the magazine has in the last few years put 10,000 volts through itself, doubling its circulation, getting noticed and winning bigger grants from the arts councils. As well it might. A new board, a grant from Ontario's Trillium Foundation (your gambling dollars at work) and a few, key new staffers and the magazine is on a tear.

Two years ago it won both the fiction and poetry prize in the National Magazine Awards -- the only categories it entered. It is a perennial finalist and has frequently had pieces accepted for the Journey Prize. It has earned many influential friends in the Canadian literary pantheon. Robert Kroetsch, for instance, has said:

"In the hopscotch world of literary guessing, The New Quarterly turns always in the direction of happy surprise, gutsy slander of what is, and the celebration of the turned page."

TNQ still has a long way to go to be truly beautiful, but it makes the most of its limited resources and has specialized in annual theme issues (see the issue on Painting, Plays and Poetry, above). It hasn't had to fall back on the device of annual writing contests which many other literaries have become addicted to (gaining them bumps in circulation, but from people who rarely renew unless to re-enter the next year's contest). And the magazine stretches out into the community, holding fundraisers for literacy, sponsoring some heavy-duty conferences and loaning its Editor to various other kinds of good works. A real gem.