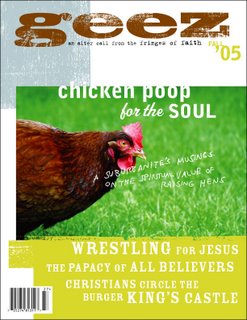 A new quarterly magazine, one with North American ambitions, is due out from its Winnipeg base on December 5. It's called Geez and it promises to anneal political activism to discussions about religion and belief.

It sold its first 200 subscriptions by offering them at half price (sorry that offer ended once they reached 200) and it costs $25 a year for 4 issues. Cover price is $7.

The magazine's tag line is "An alter call from the fringes of faith". The first issue is described as "Ninety-six ad-free pages of holy mischief in this age of fast faith. It is a journey into conversation -- from the crusading 'altar calls' of Billy Graham to the 'alter calls' of folks like Dorothy Day and Oscar Romero."

Publisher and managing editor is Aiden Enns, former managing editor of Adbusters. Editor is Will Braun, a writer who has written for Sojomail, rabble.ca and Radical Grace magazine. Art Director is Darryl Brown, a designer and illustrator in Oregon.

"Geez will mix the activist kick and visual pull of Adbusters, the intelligent critique of Harper's and the subversive elements of contemplative communities," said Enns, 43, who holds graduate degrees in religion and journalism, and has worked eight years with the church press. "There's an array of social justice magazines out there -- Mother Jones, Yes!, Clamor, Z Magazine and more -- but they rarely tap the spiritual core of social action," said Enns. "At the same time, I see religious magazines getting stuck in self-indulgent piety or personal enlightenment and ignoring wider political issues."

The magazine is throwing a launch party in Winnipeg for its premier issue next Friday at 7:30 (if you're in the neighbourhood, it's at Augustine United Church at Osborne and River. Come in the side door.)


Among the magazine's gimmicks are funky postcards, very similar to the kind of thing that Adbusters did and does to promote itself. They can be dowloaded from the website.

To find out more, go to their website or e-mail the editor aiden@geezmagazine.org.

Aiden's in the news today, with some "Buy Nothing Christmas" carol-singing festivities...