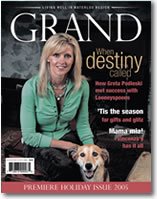 Grand is a terrific name for a brand new magazine that is to serve the Grand River valley and its communities of Kitchener, Cambridge and Waterloo. And, on first glance the publication, produced by the City Media Group, a subsidiary of Torstar Corp. which also publishes the Record, based in Kitchener, is a perfect-bound, glossy, colourful book, fat with advertising.

Editorially, however, it is all over the map. Most pieces, with the exception of the food spreads hosted by Rose Murray, look and read like ads. Pictures are posed and stilted, with a strong whiff of the advertorial about many of the articles. Display is a series of labels, rather than headings and decks. The content is generally presented more like catalogue copy than stories or journalism.

To whom it goes is a mystery, since neither the magazine, nor its website publishes circulation information. It's promoting subscriptions at $24.95 for 6 issues. Cover price is $4.95.
Tweet

How many subs do you predict they actually sell?

How many newsstand copies?

I have to figure out, first, what portion of their circ is controlled. I'll report back when I do.