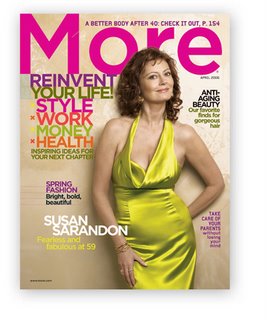 The fox is in the barnyard, but apparently we are also inviting him into the henhouse. Transcontinental Media has so enjoyed its partnership with Elle magazine (publishing Elle Quebec and Elle Canada) that it has now announced that it will publish a Canadian editon of the popular U.S. women's magazine More, starting in spring 2007.

The editor-in-chief will be Diane Rinehart, the former editor of Homemaker's magazine (1999-2003).

Transcon announced it has reached an exclusive, multi-year licensing agreement with U.S. publisher Meredith Corporation, one of the largest U.S. publishers, with 24 subscription titles (including the behemoth Better Homes and Gardens) and more tha 150 special interest pubs.

More, which comes out 10 times a year, targets the 40+ female demographic and has an Audit Bureau of Circulation-verified circulation of 1.1 million copies in the U.S. The addition will bring Transcontinental Media's magazine total to 43, including 27 consumer titles. Transcontinental will, of course, also print More's Canadian version.

"This agreement with a major American publisher is yet another successful execution of one of our primary growth strategies: to partner with otherindustry-leading companies to develop innovative products and services," said Luc Desjardins, president and CEO of Transcontinental. "Meredith's reputation as the American consumer magazine specialist for over a century now and More's popularity combine to make this a promising partnership that may foster further opportunities for both our publishing and printing activities."

[Update: Meredith also announced it was going to publish a Spanish edition of Diabetic Living and some of its Better Homes and Gardens specialty books in Spain.]
Tweet