Anokhi trying to move to the next level 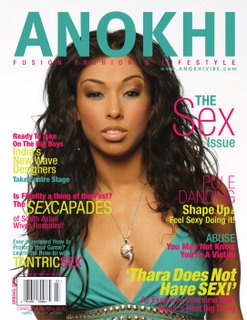 [This post has been updated and corrected; incorrect information appeared in the Toronto Star] "Some have called it a South Asian Vanity Fair," says Rajwant Girn the Toronto publisher of Anokhi, one of the best-known South Asian lifestyle magazines in North America. "We're as revolutionary as Playboy, Maxim and Oprah. They created their own markets." The magazine is featured in an article in the Toronto Star.

"Like many Toronto immigrants, Girn (left, below) loves being a hyphenated Canadian. Her Anokhi concept was to reflect modern, global, South Asian Canadians like herself," said the article. (Anokhi means 'unique' in Hindi.)

Girn has put $300,000 of her own money into Anokhi and found herself a silent partner for the initial stage through a pitch she made in an elevator. She met her editor, Pamela Arora, in 2001 at a mutual family friend's wedding. Arora had recently graduated from journalism school and was working in corporate communications. "I told Pamela it would be a hell of a ride," laughs Girn. "There were no guarantees because there was no formula."

"Our goal wasn't to grow fast and make oodles of money," says Girn.The company is looking for $5 million in outside investment as part of its second phase, with a plan to increase the print run(now about 60,000 per issue) and add online and TV components. Girn backs up her pitch with numbers."Since 1990, the market of South Asians in North America alone has grown by 109 per cent," she says. "It's a growing, affluent market. We have a purchasing power of $6 billion and 38 per cent of our subscribers are non-South Asians. Our men to women ratio is 63 to 37. We couldn't have predicted numbers like this."
Tweet