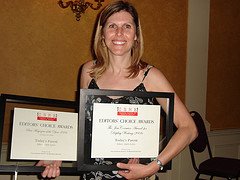 Linda Lewis, the editor-in-chief of Today's Parent magazine, is leaving Rogers Media and joining Transcontinental as editor of the soon-to-be-published More magazine.

Lewis was with Today's Parent for 13 years, the last 8 as editor-in-chief and only two weeks ago won Best Magazine (large circulation) in the Canadian Society of Magazine Editors awards.

Transcontinental recently made a deal with Meredith Corporation to publish a Canadian edition of the very successful magazine aimed at a mature woman's market. The new magazine is to debut in spring of 2007. Originally, Diane Rinehart was to edit it, but she decided to withdraw in order to pursue educational opportunities.