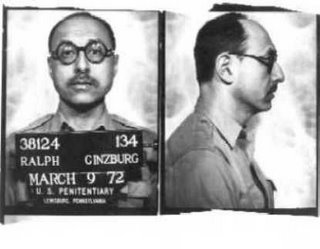 Belated notice of the death of Ralph Ginzburg, who died last week and in his own unique way was one of the most influential people in magazine-dom and who broke trail for many of today's most outrageous and in-your-face publications. He went to jail for eight months (his prison mugshots in 1972 at right) for obscenity for publishing his magazine Eros (which never published its fifth issue) and later wrote a book about the affair called "Castrated: My Eight Months in Prison". Eros was notable for being hardcover and beautifully designed by Herb Lubalin and sold via mail order (a business for which Ginzburg showed a particular aptitude). A tribute was published in the New York Times.

"'Obscenity' or 'pornography' is a crime without definition or victim," Ginzburg said. "It is a bag of smoke used to conceal one's own dislikes with regard to aspects of sex."

"Mr. Ginzburg shut down the magazine when he started serving his sentence," said the Times. "Afterward, he and his wife tried to revive it as a tabloid newspaper, but it lasted only one issue.

"It was a costly mistake that drove them to the brink of bankruptcy, which was averted only through the success of yet another periodical, the consumer adviser Moneysworth, which attained a circulation of 2.4 million."

Moneysworth showed again Ginzburg's flair for copywriting and direct mail promotion. His ads were dense with copy and with arresting, bold black headlines like "You're Being Robbed!".

Ginzburg had the distinction of being the first to publish Ralph Nader's writing in an earlier magazine called Fact. And he was successfully sued by presidential candidate Barry Goldwater for what was written about him in Fact, but (after going all the way to the Supreme Court) Goldwater got $1 in damages.

In recent years, he moved away from publishing and concentrated on photojournalism, selling his first work at the age of 55. He died of multiple myeloma at the age of 76. He blamed his conviction over Eros for derailing his career. "I have always felt that I might have become a major force in American publishing had it not been for my conviction. Instead, I'm just a curious footnote."
Tweet