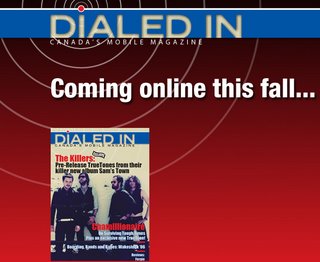 Sometimes new magazines come about by the most roundabout ways. Sometimes you wonder whether they are really magazines at all.

This particular publication, just announced, is called Dialed In, and it started with a cell phone ringtone. The music magazine is to be distributed to some 1,600 high schools across the country. According to an article in Hour.ca, Dialed In aims to become the first truly "interactive magazines". A Vancouver entrepreneur called Dan Reitzik, the President and CEO of Digital Youth Networks began by giving away free cellphones, with ads included, then moved on to print advertising in major newspapers, and now is producing a companion publication in which every page, including the cover, will promote wireless content and try to get kids to buy ringtones and content for their cellphones. (We can only wonder about why high schools would go along with distributing what amounts to an elaborate flyer to their students, but there you are.)
Reitzik is unabashed about the reason he's doing a print magazine. It's part of the pitch: "The basic premise is that mobile content is a way to customize a cellphone," he says. "The bottom line is young people use cellphones to waste time. Older people use them to save time. We allow people to buy products and content for their phone."

The Hour's column, The Explainer, explained about how Dialed In will work:

The first issue features The Killers on the cover, and inside are brief articles about the artists whose ringtones and voicetones are available for purchase. The articles are short as the focus is on getting young people to pony up the dough or enter a contest to, for example, go to a Black Eyed Peas concert and meet Fergie in person...Unfortunately for Quebecers, our complicated provincial contest rules means we can't enter, for now. Reitzik is hoping to cash in on the growing ringtone and mobile content market. At the end of 2005 there were 16.8 million cellphone subscribers in Canada, and we purchased roughly $1.5-million worth of ringtones that year, while sending 8.7 million text messages per day.

If you'd like to see a pdf of the whole premier issue, go here.

[By the way, that's how they spell dialled.]
Tweet

Any bets on whether high schools actually distribute a mag with a coverline like that, in light of the tragedy in Montreal?