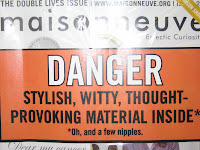 A classic case of getting a lemon and making lemonade: Maisonneuve magazine's current issue is polybagged because of the overheated sensibilities of Chapters magazine buyers concerning some nudity.

In the winter of 2003 the magazine ran a tasteful photograph of performance art by Italian artist Vanessa Beercroft in the back of our Sex and Death issue -- several naked women either standing or sitting, and clearly identified as art. But the U.S. chain Barnes and Noble pulled the magazine off their shelves and put them in poly bags.

About to run some photos in its current issue, accompanying a feature about a stripper, and not wanting to repeat the 2003 experience, Maisonneuve asked the advice of its distributors LMPI; their rep didn't see a problem, but noted that Chapters might demur. (The company now demands that all the "gaming titles" be poly-bagged due to the ads in the back.) Sure enough, when the magazine were shipped, Chapters pulled the magazine out of the promotion and demanded that they be polybagged, delaying their arrival on the newsstand.

"We figured that since we had to poly-bag the issue we wanted to get as much attention to the magazine as possible," said Deborah Brewster, the business manager for Maisonneuve. "So, we decided to place a large sticker across the front alerting consumers of the material inside." (In case you can't read all the image, it says: "Danger: Witty, stylish, thought-provoking material inside* -- and in smaller type "*Oh, and a few nipples.")

It was a cheeky move and it will be some time before the results are in. But it seems likely that the polybag will not only intrigue potential readers, but may also increase sales. Better if it hadn't happened, but also quite encouraging to see there's a way to respond to such lame and silly diktats.

Right on! This is the only way to respond to lame and silly censorship...

Very funny and creative solution to a sad state of affairs at Chapters.

Beautiful! I love your current issue, especially the title, and have bought three issues, two for friends.

You are a circulator's wet dream.