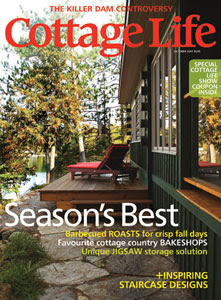 It received seven gold and two bronze medals as well as two awards of merit. It was picked as Magazine of the Year (over 40,000 circulation).

Cottage Life has been published by Quarto Communications since 1988 and has a total paid circulation of 71,000. Publisher is Al Zikovitz, General Manager is Terry Sellwood. Penny Caldwell has been the magazine's editor since 1991 and was named Editor in Chief in 2000. She was named Editor of the Year in 2006 by the Canadian Society of Magazine Editors.
Tweet