Rue Morgue shivers its way into its second decade 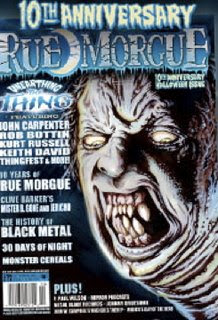 Congratulations on 10 years of horror and entertainment to Rue Morgue magazine, started in the fall of 1997 by Rodrigo Gudino, who was bailing out of the frustrations of the music business (he had been music and reviews editor of the late RPM Weekly). No one can say Gudino isn't diligent in his study of "horror culture"; before he launched the magazine, he watched -- in order -- all 100 of the most influential horror movies of all time as compiled by horror novelist Stephen King.

The magazine has an international following and the company that publishes it Marss Media Inc. is branching out into independent production of specialty horror films. The magazine's content is not to everyone's taste (mine included) but there's no arguing with its success and loyal audience. The October issue (shown) contains a personal memoir of the motivations and first 10 years by Gudino.
Tweet