Pay up, said Spacing blogger,
and the Toronto Sun did 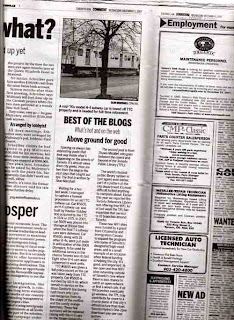 When the Toronto Sun recently appropriated the entire contents of a blog posting, plus the accompanying picture, from Spacing magazine's blog, the writer took a firm but unequivocal stance: pay me the standard rate for this. And you know what? They did.

Blogger Sean Marshall wrote an item about and posted a picture of an old TTC subway car going to its reward, ignominiously riding on the back of a flatbed truck. The Sun picked up the whole item and ran it in their "Best of the Blogs" feature.

Marshall wrote, saying he would invoice them but needed to know what their standard freelance fee was. Rob Granatstein, the editorial page editor of the Sun, wrote back and told Marshall to bill him $75 for the article and $25 for the pic.

I did throw to the site, but throwing to the permalink just doesn't look great in the paper [said Granatstein]. By running it immediately, the piece is usually not hard to find. That said, send me an invoice and we'll do better next time.

This is not the first time Spacing's blog has been treated in this way: the same thing happened at the National Post. And (unsuccessful) mayoralty candidate Jane Pitfield ripped off an entire blog item for use in her campaign.

Unfortunately Mr. Marshall still got taken for a ride. A "standard" rate of $75/article + $25/photo?! Check what the real rate is for a photo and article, had the Sun assigned it rather than stolen it.

If a storekeeper caught a shoplifter in the parking lot, would the store clerk ask the thief what he'd like to pay for the stolen goods?

Could have easily received $500, which is the automatic minimum statutory damages for copyright infringement in Canada.

This is another example of why Spacing is a joke.

Yeah, Spacing must be a joke because they stood up the a big paper. Get real!

Good for them. While you may be able to fight, with lawyers, to grt the $500 the first commenter mentioned, they got they got their money and probably didn't burn any bridges. While it may not be the most ideal, it has a lot to do with them having a good reputation and are well respected.

Magazines that are a joke don't win Mag of the Year and National Mag awards. Just sounds like other mags editors envy them....

Spacing is a joke because they can't get anything real done despite the fact that they have Miller and Giambrone. They haven't accomplished any real results. Video contests and shitty deputations to committees looking at street furniture don't count for shit.

Burn bridges? Their copyright was blatantly infringed, the infringer got away with it and your concern is burning bridges? Are you for real? This has happened three times. Who's going to bother getting permission to use their material? Just use it anyway then pay them a pittance.

Maybe when Spacing accomplishes something real for the city aside from putting out a prettier version of the soft-left pap we've been getting from Now and Eye for years, then they won't be a joke.

National Magazine award? Yes, they deserved it. Spacing is a very pretty magazine and on a few occasions the magazine has had some good journalism. But activists they're not.

thickslab seems a little too angry for his own good, which is like of the the "he doth protest too much."

I'd ask what would you like to see them do, thickslab, but also I'd like to know (and I ask this because of your anger which makes it seem personal) what have you done?

Its a magazine, not an activist group.