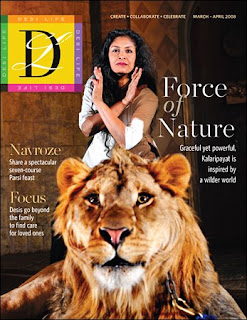 The biggest hazard in most magazine fashion shoots is a broken nail or boredom while endless setups take place. But for Desi Life magazine, owned and distributed by the Toronto Star, it was somewhat more dramatic. According to a story in the Star, a martial arts teacher was knocked over by a lion during a photo shoot at Bowmanville Zoo. She came away with four broken ribs and a bloodied lung.

The photo session happened a month ago and the final cover photo that resulted will be published today (Thursday). The incident with the lion was videotaped, however; not to miss the promotional opportunity, the Star waited until yesterday to report on the incident and post a video of it on its website.

"To be honest, the sensation I have is a great deal of gratitude to be alive," Gitanjali Kolanad said yesterday. Kolanad, 54, practises the ancient Indian martial art of Kalaripayat, fashioned after the movements of such animals as an elephant, wild boar or peacock ...and a lion. It was the magazine's suggestion that she pose with a lion.

"I thought, 'Sure – Photoshop,'" Kolanad recalled. When she understood better, she was excited, she said, and an appointment was made with "Leo" for Feb. 20.

The video of the session shows editor Sonia Verma knocked momentarily off her feet then picking herself up and smiling.

It next paws the legs of photographer Richard Lautens. Off-camera, it also took a swipe at the legs of art director Spencer Wynn. "I felt it for a couple of days," he said.

The 3-year-old lion was lying nearby when Kolanad began her movements. Apparently still wanting to frolic, the animal jumped up and fell on her, knocking the wind out of her, bruising her left lung and breaking four left ribs.

It was not an attack, the witnesses said. The lion's mouth was not open and Kolanad was not scratched.

Kolonad was off work for the past month. Editor Verma in her current editor's column downplayed any danger:

For his part, Leo the lion was born in captivity and grew up surrounded by people. At age 3, he’s more like a frisky puppy than a predator. He made friends with all of us at the shoot and was soon rolling on to his back to have his tummy rubbed and knocking us over with unexpected head-butts. Yet, even at his most playful, there was no disguising this gorgeous animal’s strength and power, and Gita’s every move took on an extra dimension of grace and power.

As we wrapped up our shoot with an increasingly rambunctious Leo, he decided to have one final frolic with Gita. Our model wasn’t facing him and didn’t see the 400 pounds of good-natured wildlife hurtling her way until it was too late.

Six hours and four fractured ribs later, her lungs bruised but her sense of humour intact, Gita joked about having one heck of a story to tell her kids. And as we left the hospital that night, she had one question for us: “Did we get the shot?”

I just watched the video. This is unbelievable. How stupid are all these people?
And how stupid are the people who thought, hey, this will make a great promo for the new issue?

Wow, if that's not an argument for better regulation of roadside zoos, I don't know what is. It's clear from viewing the video that they had no idea how to handle the lion--they're fortunate that he was "playing" because if he'd decided to do more, they couldn't have stopped him. I have to agree with the other comment--it's in extremely poor taste to use the video to promote the magazine. Where else would you see a workplace accident that put someone in the hospital and then off work for a month promoted in such a jolly tone in the editor's letter and a "hey, look what happened in our photo shoot" video? It's mind-boggling.

And to make matters worse--it's actually a lousy cover. The focal point is that mangy looking lion, the secondary coverline under "force of nature" is unclear (unless you already know what Kalaripayat is, it could be the woman's name--who knows?), the "Focus" coverline is wasted (are you commanding the reader to focus or confusing a section label with a coverline? The subline would have been a much better sell), there's little reader benefit in any of those coverlines, and the masthead and tagline are a mess (tagline so far away that it just sort of hangs there, and besides, it's just a tepid grouping of three words that start with C). And for this you could have killed someone. Yikes!

I just watched the video. That was horrifyingly stupid. No after-the-fact "spin" could convince me that was a well-managed shoot.