Murdoch empire invests in biggest printing plant in the world 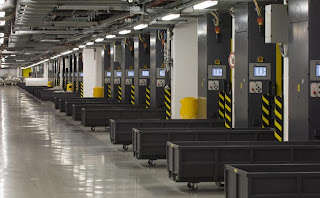 News International, the Rupert Murdoch multinational, is opening what it calls the biggest printing plant in the world.

The result will be dramatic and wide-ranging improvements in the deadlines and the redesign of pages in its four national newspapers when all of them move later this year to the new Broxbourne plant in North London from the current premises in Wapping.


It will be interesting to see whether such a show of confidence -- in fact an act of faith -- from one of the biggest international players will give courage to smaller battalions in the struggle for audience in the face of the web.

James Murdoch, the chairman and chief executive of News Corp's Europe and Asia division, said the investment "should be ample answer to those who believe the business of journalism, in print, is a business for yesterday's readers, not tomorrow's."

The changes will affect the Sun, the Times, News of the World, the Sunday Times and the London Paper, boosting their pages of colour editorial and advertising.

The new £187 million Broxbourne plant is only one part of a £650m investment including plants in Knowsley, near Liverpool, and Motherwell, near Glasgow. The Broxbourne plant is the size of 23 football fields, with 12 full-colour printing presses capable of printing 86,000 copies per hour -- almost 3 times what can be done now.

The "triple-width" printing presses can produce tabloid and broadsheet newsprint simultaneously, meaning that many traditional editorial and printing deadlines could be scrapped. For instance, the Sunday Times, which currently begins printing on Wednesdays, could now be printed entirely on Saturday, making more sections "live" and providing full results from Premiership and Champions League football matches available across the country for the first time.

According to a story in the Guardian, NI commissioning MAN Roland to create presses that can handle six pages simultaneously rather than the standard four - making the Broxbourne operation 50% more efficient in one hit. All this with only 450 staff, two-thirds fewer than ran the presses at Wapping.

Even Guardian columnist Roy Greenslade, well-known for pronouncing on the impending death of print, was impressed. "I've never seen anything like it before in my life."
Tweet