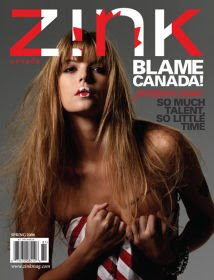 Fashion Week is in high gear, particularly in Toronto, and as part of the celebrations, the 6-year-old New-York-based fashion/lifestyle book Z!nk has given birth to a huge (304 pages in its premiere edition) quarterly, Canadian edition.

It will be published in Montreal and has a projected circulation of 200,000 within the first year, says Media in Canada. (The magazine's Canadian media kit quotes $12,000 for a one-time, 4-colour page. No circulation data is provided.)

Z!nk was co-founded by Canadian-born model Isabelle Sabourin and the magazine "targets a unique set of influencers, capturing the imagination of industry insiders and the consumers who follow their lead," says editor-in-chief/publisher Sheriff J. Ishak - the husband of Sabourin.