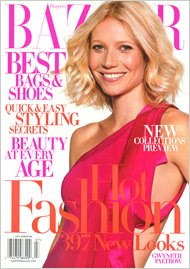 If ever there was an example of the pressure under which consumer magazines feel from key advertisers, the current issue of Hearst's Harper's Bazaar is it.

The issue devoted 40 editorial pages to four celebrities and models who are also the face of a new line of fragrance from heavyweight advertiser Estée Lauder. The pages -- The package includes the magazine’s cover of Gwyneth Paltrow, 38 pages in the consecutive advertising-free section,” plus 2 pages in the beauty section.

Also featured are Elizabeth Hurley, Carolyn Murphy and Hilary Rhoda — who also star in the advertising campaign for Sensuous, a new fragrance from Estée Lauder. According to a story in the New York Times, the issue didn't contain ads from the company (but, then, why would they?) although ads are scheduled to run in the fall. John Demsey, a group president of the Estée Lauder Companies, said there was no quid pro quo for the expansive feature.

“Boy, they really sold out — Hearst — didn’t they?” said Allan Mottus, a beauty industry analyst who publishes the Informationist, a trade publication. Mr. Mottus added: “You have to take your hat off to Lauder. It is an enormous coup.”

“There is nothing either kosher or unkosher about what is going on,” Mr. Mottus said. “These are hard times in the prestige fragrance industry. It is advantageous for people to partner and make a larger statement than they could otherwise.”

Hearst issued a statement that said:

“Like many magazines, we often feature celebrities to coincide with their beauty and fashion launches.”

“Advertisers have something to show now and say, ‘Why am I not getting this treatment?’ ” Ms. Dang said. She recently started a marketing firm, KVD NYC, and has consulted for Lauder. “In the current economy, I think advertisers have more muscle.”