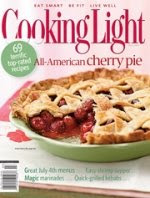 This is turning into an informal series -- looking at the kinds of creative brand extensions and partnerships that print magazine publishers are entering into. This time, courtesy of a story in Ad Age, we have a partnership between a U.S. food magazine and a boutique hotel chain.

Cooking Light magazine has formed a partnership with Kimpton Hotels & Restaurants capitalizing on a common emphasis on health and wellness. The deal includes discounted room rates for Cooking Light readers and Kimpton venues for Cooking Light "Supper Club" events, but could expand to areas such as integrating Cooking Light advertisers into the hotels' amenity packages.

The trick seems to be finding the right fit. "Kimpton and Cooking Light are both committed to healthy and well-balanced living," said Niki Leondakis, COO of Kimpton. The hotel chain also has a higher percentage of female guests than the industry average, she added; nearly 84% of Cooking Light's readers are women, according to the latest Mediamark Research report.
It's not altruism on either side, of course. Cooking Light is trying to push back against a 14.4% drop in ad pages in the first half of this year. It's ABC measured average paid circulation has increased, however, by 5.2% to 1.8 million.