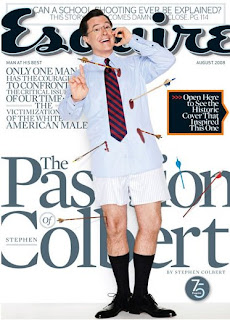 It was deliberate and probably meant to be an homage, but it just turned out to be stupid. It's one of several covers this year that were meant to celebrate the magazine's past glories. But, without getting too reverential for what was, the exercise is simply pointing out the lameness of today's covers.

It's bad enough to be short on originality and putting out one celebrity cover after another, but the art directors of Esquire have now put out a pastiche of an iconic and original cover from 1965 in the current August issue (above). As Jandos Rothstein says in Designing Magazines:

What had been, in Lois’s hands a wry visual take on contemporary culture is reduced to satire, cheesecake and affectation.

The smoke must be coming out of George Lois's ears, given his well-known criticism of bad cover design. Yes, Lois adapted the image of St. Stephen peirced with arrows to make a point about the martyrdom of Muhammad Ali. But this coveradapatation of an adaptation manages to be derivative without being funny or 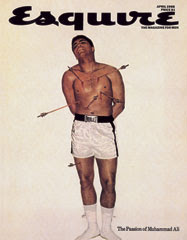 interesting or having much of a point at all.

(If there's any irony here it is that the Esquire designers only have to go down the street to see a retrospective of the genuine articles at the Museum of Modern Art. )

Kimberly Croft at Publication Design calls the cover "tasteless" and points out that this is not the first time the designers have missed the point in trying to key off their distinguished history.
Tweet