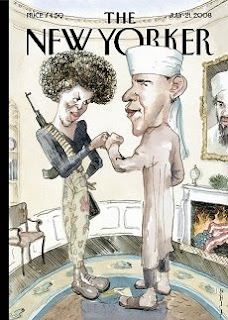 They walk among you...I mean those darned Canadian illustrators. The current New Yorker cover showing Barak Obama in Muslim garb, fist-bumping with his wife Michelle, dressed in fatigues, has raised a ruckus. Well blame Canada, which exported Barry Blitt to New York. The "Obama camp" (whatever that is) decried the cover art as "offensive and tasteless".

David Remnick, the editor of the New Yorker, explained his cover decision to the Huffington Post and said of the people who are cancelling their subscriptions over the cover treatment:

It's not the first time. I respect people's reactions — I'm just trying to as calmly and as clearly as possible talk about what this image means and what it was intended to mean and what I think most people will see — when they think it through — that it means. The fact is, it's not a satire about Obama - it's a satire about the distortions and misconceptions and prejudices about Obama.

Blitt himself told CBC.ca:"I think the idea that the Obamas are branded as unpatriotic [let alone as terrorists] in certain sectors is preposterous," Blitt told the HuffingtonPost.

"It seemed to me that depicting the concept would show it as the fear-mongering ridiculousness that it is."

I knew Barry Blitt when he still played second base for the co-ed Toronto Life softball team.

What all this says to me is that magazines still have a lot of power if so many people are getting cranked about this.