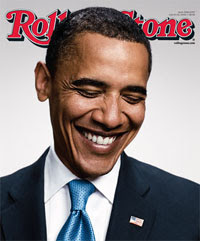 Was a time a publisher could quietly do a few focus groups, discreetly send out a questionnaire and quietly contemplate possible changes, major or minor. Such was Rolling Stone's intention in polling selected readers about their reaction to the possibility of a major design. However the brown envelope of the proposed new look wound up in the hands of John Koblin, the Media Mob columnist at the New York Observer.

What Rolling Stone is considering is a "tighter, smaller, glossier" perfect bound version of the magazine. "We are considering a major change in the format of Rolling Stone from its current look to one more like the enclosed test issue," said the cover letter from publisher Jann Wenner. The dummy replicates the current issue of the magazine featuring Barack Obama, only with a smaller, redder logotype, says the story. The dummy is about the same size and feel as Vanity Fair.

Inside the magazine, it appears the content is all there, just jammed into tighter spaces with sleeker-looking photos. The paper seems a bit glossier. The binding makes the magazine feel more substantial; a heavier object at 146 pages rather than the broader 120-page classic look. That's one of the few positive things we can say about it. Otherwise, it just feels so ... generic. It doesn't retain any of the flavor of the old Rolling Stone, and the way that a magazine feels in your hands is half its game. Also, the scented ads for Diesel and Armani Acqua di Gio kinda smell more and an eight-page, heavy-stock ad for Chevy feels enormous in the new binding.

If the readers were to react favourably, the new look would be a long, long way from where RS started in the '60s as a mostly black and white tabloid newspaper. It would shed what little remains of its "counterculture" feel (though most of that has eroded over the years with glossy covers and a publication fat with mainstream ads).
Tweet