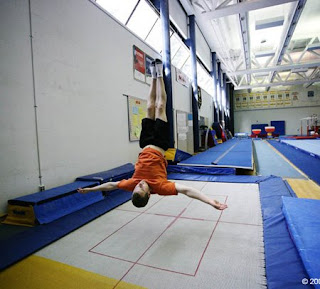 In Athens 2004, Shewfelt became the first Canadian to win Olympic gold in men's artistic gymnastics and was preparing for another Olympic run when, last August, he suffered a devastating injury in training. Both his legs were broken and held together with steel pins and plates. His struggle to triumph over the injury is documented in an exclusive behind-the-scenes account at unlimitedmagazine.com.


"Kyle Shewfelt's story will really resonate with our readers," says Dan Rubinstein, editor of Unlimited. "Fortunately, most of them will never suffer this kind of injury at work. But Kyle's passion and drive to beat incredible odds - that's a lesson we can all learn from. He could have quit after that injury. Instead, he began to work even harder."

Thanks to this great story, I came across this quote:
“Stress is a perception,” the CEO wrote. “It is how it is managed that determines its impact.”

Then had a look at Kyle's blog, also an interesting read since Kyle is now in Beijing.