Women's Post, a twice-a-month tabloid newspaper launched six years ago, is transforming itself

into a weekly newsmagazine. According to a story in Media in Canada, the relaunch will be August 1.

"We will be one of the few magazines that educated women won't be ashamed to read in public, " said publisher Sarah Thomson.

As part of its campaign to reposition itself, the magazine will be distributed to cottages in Muskoka for three weeks during August. Major advertisers in the first issue include Harley Davidson, Acura, Mercedes-Benz and Restylane, a suite of products from Medicis Aesthetics Canada. Although the story wasn't specific, it is presumed distribution will continue to be controlled by the current combination of streetcorner boxes, selected household and retail distribution.

The proportion of the Toronto circulation as about 85,500 was revealed by Thomson (below, left) in 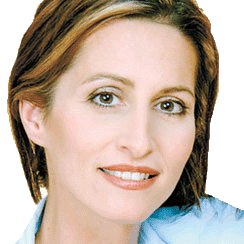 her publisher's letter on the magazine's website. It was a public response to a complaint from Globe and Mail Vice President and General Counsel Sue Gaudi about Women's Post claims that it reached more mid- to high-income professional women than the Globe and Mail. In a remarkable display of chutzpah, Thomson claimed that published data shows the Globe's distribution to females in Toronto is 51,744, while Women's Post delivers 85,500.

"I am quite eager to grow our current distribution numbers in the rest of the country. It won’t be long before we will indeed be claiming to have more women readers in Canada than the Globe and Mail. Shall I look forward to another letter from you once we do?"