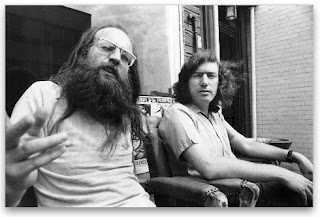 Coda, Canada's jazz magazine, celebrates its 50th anniversary this year. The (now) six-time-a-year magazine, was started in 1958 by John Norris is one of Canada's longest-running continuous music publications, and certainly its longest-lasting jazz publication. (A series of events were held in May to mark the anniversary.)

Norris started out in Canada running the jazz department at Sam the Record Man on Yonge Street in Toronto. In 1963 Norris was joined at Coda by Bill Smith as art director; the two of them also ran the Jazz and Blues Centre, a Toronto institution from 1970 to 1983 and in 1968 established the very important Canadian jazz record label Sackville Recordings.

According to an entry in the Encyclopedia of Music in Canada, Norris was editor 1958-76.Smith served also as co-editor 1976-83 with David Lee and as sole editor until November 2000.The 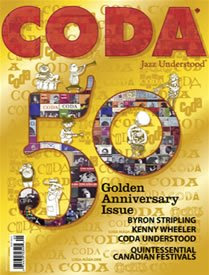 magazine was sold in 2000 to Warwick Publishing Group and is now published by Ontra Enterprises. Its current publisher is Mark Barnes.

It has had various frequencies and various taglines through the years including The Canadian Jazz Magazine (beginning with the June 1959 issue), Canada's Jazz Magazine (August-September 1964), The Jazz Magazine (October 1976), The Journal of Jazz and Improvised Music (August 1984) and now simply says Jazz Understood.

Its respect among jazz afficianados has always outstripped its circulation.The magazine has rarely had sold more than 3,000 copies per issue and a good deal of that was outside Canada;

[Photo: Smith (left) and Norris, sometime in the early '70s by an unidentified photographer]

I've been called many things but "jazz stalwart" might be my favourite, so far. But the link is wrong. Should be http://boppin.com/2008/05/coda-magazine-turns-50-but-is-still.html