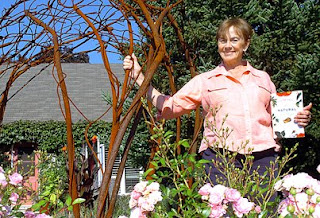 Liz Primeau, the founding editor of Canadian Gardening magazine, and former editor of Ontario Living, is in the midst of a whirl of publicity for her recently published memoir My Natural History: The Evolution of a Gardener. (Tonight she'll will be signing and selling copies at 7 p.m. at the Mississauga Central Library. On the weekend,she was reading from it at Word on the Street in Kitchener.)

In an interview with the Mississauga News, Primeau said she got her feet wet in journalism in the 1950s when she was a member of the women's auxiliary at the South Peel Hospital.

"My first story was about the crossing guard at Lakeshore Rd. and Dixie Rd. and I did stories about things like the new traffic lights at Applewood Rd. and the South Service Rd."

The experience whetted her appetite for magazine journalism. She eventually worked for many of Canada's top publications, including Toronto Life and Chatelaine before the launch of Canadian Gardening.

But people understand the principle when they see it in action. When she and her husband Chris Zelkovich replanted their entire front yard a decade ago, there was consternation from many neighbours.

Now, there is a parade of similar treatments in the front yards of her neighbourhood. That makes the garden writer smile with pride. "Once it starts to happen," she says, "the ball rolls faster and faster."