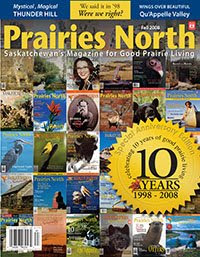 Prairies North, Saskatchewan's Magazine for Good Prairie Living, is this month celebrating its 10th anniversary publishing one of the west's best indie titles. The anniversary event is on Friday, October 17 at the Yvette Moore Gallery in Moose Jaw and will feature a prairie auction highlighted by a painting by the self-same Yvette Moore.

The quarterly magazine, which started life as Saskatchewan Naturally, is published out of that non-hotbed of magazine publishing, Norquay, Saskatchewan (one magazine; one restaurant) but its reach is considerable. It has a circulation of some 22,000 across Canada and internationally. Congratulations to the founding couple, Lionel and Michel Hughes, who are inspirations to independent publishers everywhere.
Tweet

Thank you for the attention, Dave! We love you guys out there in the "centre" of Canada, even at election time... (smile).