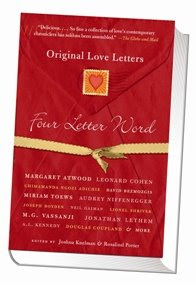 In celebration of its 5th anniversary, The Walrus magazine in association with Vintage Canada is holding a contest that invites all comers to write a love letter.

The contest coincides with the paperback publication of Four Letter Word, a collection of fictional love letters edited by Joshua Knelman (the former fiction editor of The Walrus) and Rosalind Porter.

The book has already been published in 8 languages and in 11 countries and contains 41 original love letters from some of Canada's best-known writers, including Margaret Atwood, Leonard Cohen, Douglas Coupland, Miriam Toews, David Bezmozgis, Joseph Boyden, and MG Vassanji.
The rules are simple. Maximum length, 500 words that may be fiction or thinly disguised real life. Entries close on Valentine's Day, 2009.

Maybe you need to confess your love to Britney Spears, or to the Prime Minister of Canada, or to your favourite pair of designer jeans. Perhaps a sonnet to youThe winning love letter will be announced on March 1, 2009. The letter that wins the judges' hearts will earn a $1,000 GRAND PRIZE, as well as another $1,000 in prizes from Deutsche Grammaphon. The letter will also be published on the Walrus website. Perhaps a sonnet to your trusted neighbourhood tailor who so carefully patched the hole in your football jersey from high school. Or the girl you never had the nerve to actually talk to in high school. Maybe it's a love letter to Free Market Capitalism. No one will judge you (Actually, we will. This is a contest after all).

Joshua Knelman was a founding staff member of The Walrus magazine. His writing has appeared in The Walrus, Toronto Life, TORO, Saturday Night, Quill & Quire, the National Post and the Globe and Mail. He lives in Toronto.

Rosalind Porter is a senior editor at Granta Magazine and has written for the Spectator, the Times Literary Supplement, the Financial Times Magazine and Time Out. She lives in London.