Is Esquire leading the way down the slippery slope? 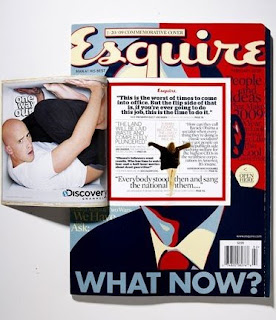 The current "flap" over the cover of Esquire magazine (see previous post) is raising the question whether such an thing in a "marquee" title will make it much more difficult for other magazine editors to resist such compromising of editorial integrity.

A story in Portfolio quotes Maximillian Potter, executive editor of Denver-based 5280 who says:

From a selfish editorial perspective, it becomes extremely difficult for editors at far less marquee brands than Esquire to fight off what may be tempting ethical advertorial compromises when the likes of Esquire appear -- appear -- to be doing it and there is little to zero discourse or ramifications. Not that it's Esquire's problem, but it makes it harder for we little editor guys to stand up to such business-side ideas if presented when the big-boy editors are doing it.

Sid Holt, the CEO of the American Society of Magazine Editors, is curiously quoted saying rather enigmatically both that the cover is in keeping with ASME's ad:edit guidelines and that "it puts us at the top of a slipper slope".

Anything that would suggest the cover of a magazine can be sold to advertisers the way developers sell real estate -- 'will build to suit' -- is cause for concern.

A commenter stakes out another position:

Sid Holt isn't kidding anyone here. The idea that covers are sacred has long ago been sold down the line. With cover wraps, post it notes and false covers, readers have seen plenty of advertising on what is supposed to be the cover. Face it, times are tough. Would you rather be pure, and out of business? What editors need to do is make sure the cover ad is relevant and in the spirit of the magazine.

Wait! That violates another credo of publishing, the separation of advertising and editorial. Should we address that myth now also? -- Jonathan Hutter, Portland, Maine

Is Equire leading us down the slippery slope? I don't believe so. On the contrary, I think it's leading the way in terms of finding innovative new ways to meet advertiser demands—without selling out. Take this cover flap, for example. There is no blending of editorial and advertising. Nor is their an ad directly on the cover, sharing space with editorial. What we have is a flap, and on the IFC of the flap is an ad. The facing "page" under the flap, meanwhile, is editorial. But, critics will argue, the IFC flap ad is on the cover. Really? I disagree. The ad is on the IFC of the flap. It's not on the cover. It's no different than your run-of-the-mill IFC ad, or OBC ad, for that matter. The only thing different between this flap and things like over-covers and the like is that it's embedded in the middle of the cover. It's new, and people are freaked out. But when you really look at it, it doesn't contravene ASME's ed-ad guidelines. Nor Canada's for that matter.

There's nothing wrong with this. It's just a different approach to offering up real estate to advertisers. Will the readers be confused as to what is an ad and what is editorial? No (unless they're already confused by the traditional model). That's the test. And that's all that matters.