Magazine-friendly e-reader may be
only a year away 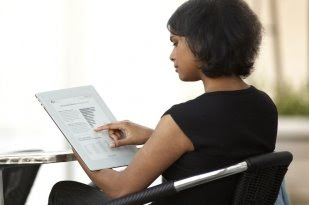 Current "e-readers" like the Kindle and Sony Reader weren't designed with periodicals in mind, such as magazines. They were designed for reading books.

But it is looking more and more like technology may catch up with interest and need.

As an article in the New York Observer points out, Kindle offers formats for magazines, but "hokey black-and-white screens" don't do them justice. And free applications for the iPhone and other devices such as Stanza and eReader, compete with the expensive digital readers, but their tiny screens don’t replicate the visual experience of a magazine page or spread.

Now, Plastic Logic is hoping to launch the first mobile digital reader made specifically for newspapers and magazines by 2010; and in colour. Daren Benzi, the company's vice-president of business development, said:

“The demand for our product is overwhelming."

Publishers who are shying away from developing their own readers are more open to a partnership. So far Plastic Logic partners include the Financial Times, USA Today and digital publishers like Zinio—which converts print magazines from Cosmopolitan and InStyle to Mother Jones and The Economist into digital formats.
The Plastic Logic prototype (shown above) is plastic and thinner than a memo pad, with an 8.5 x 10.7 inch display, nearly twice the size of the Kindle screen (and more than four times that of an iPhone or Blackberry). The screen is flexible, though so far it only shows black and white images, incorporating display technology from Cambridge-based company E Ink. But Benzi says screens will be in colour, one way or another, if not with E Ink, then with another supplier.

"The one thing we have noticed with publishers, even though they know it’s on our road map, is they say as soon as I get [colour] they’ll come with me.”

Of course there's nothing to say Kindle won't meet the competition in colour, at least and word is that Apple is considering launching its own e-reader. The Observer article reports an analyst's estimate that Amazon has sold 190,000 to 500,000 Kindles in their first-year.