The nice, warm feeling only a fundraising
letter can bring 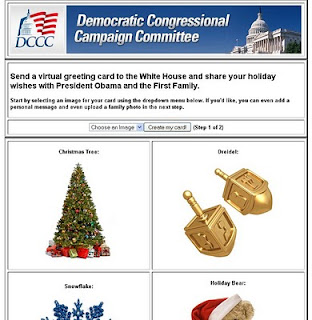 I quite like Mother Jones magazine; its journalism and its politics. But I hadn't realized that by subscribing to their e-letter, I have become a U.S. Democrat. This was brought home to me when I received a fundraising message from "House Speaker Nancy Pelosi" and the Democratic Congressional Campaign Committee, asking me to join what is, in effect, a chain letter to the President of the United States, Barack Obama and his family and to corral five of my friends to  do the same.

Our extraordinary progress this year would not be possible without dedicated grassroots Democrats like you. You worked every day to put Main Street first, to create millions of clean energy jobs, and to make health care affordable for the middle class.