After 114 years of publication, revue Commerce is being closed down by Médias Transcontinental. Editor Diane Berard will write for sister publication les affaires and she will have a blog.
Last fall, it was announced that Berard was leaving the magazine at the end of 2009 and that Transcon was considering a wholesale change, including the name and perhaps publishing the magazine online only.  At the time, a story in La Presse said the issue that will appear in December will be the last with the current look and feel. Commerce, which started out as a newspaper, became a magazine in the '50s and was acquired by Transcontinental Media in 1982. Stephan Lavallée , head of the business publications group, was to be responsible for the redesign and repositioning of the publication. 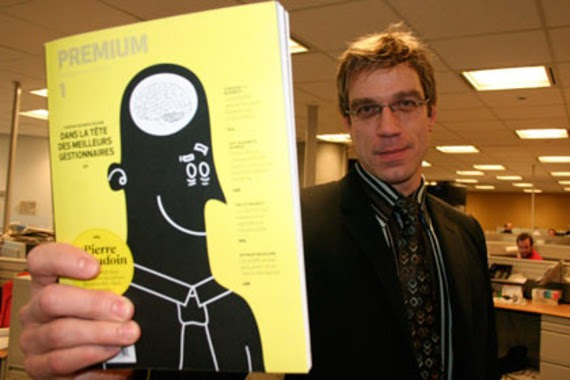 What has emerged to replace Commerce is apparently a wholly new magazine. Transcon has announced the launch of a new bimonthly business magazine called Premium in spring 2010 that will translate and publish articles from other business magazines from around the world, edited by Jean Paré (shown above). It is referred to as a "bookazine" and Paré confirmed:

"Premium is like six business books a year, with a wide variety of topics that will be published every two months."

The magazine will adapt articles from such sources as Harvard Business Review, Business Strategy, The Economist and MIT Sloan Management-- a sort of Reader's Digest for business. It will also apparently have articles written by Quebec business leaders as well as news about research in management, finance and technology.

And Transcon has a hard time understanding why freelance writers want to retain their current rights?

I guess their lawyers have convinced them that it's actually okay for a snake to eat its tail.

Yes, first question that comes to mind: what is Transcon paying these writers for second rights?

and i am pretty sure that the other magazine will put in their contract a fee for a one time usage, this new publication is a argument for freelancer who deals with transcon