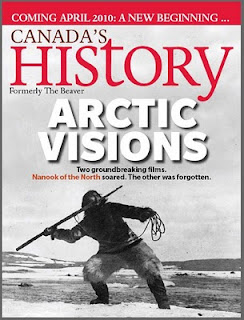 After 90 years, many of them as an unfair butt of vulgar jokes, The Beaver: Canada's History Magazine, will be changing its name, effective with its April issue. Henceforth it will be called Canada's History magazine and there has been a redesign of the logo both in print and online.

The change has been some time in gestation and effectively moves the tagline into pride of place.

The Beaver began as a house organ for the Hudson's Bay Company in 1920 as a 250th anniversary project and evolved into a regular magazine about Canada's north country. In 1994, the company gave its archives and artifacts to the province of Manitoba and gave a large endowment for the future management of the magazine by the newly formed Canada's National History Society for the promotion of contemporary interest in the nation's history.

The parent organization's mandate extends well beyond the current 50,000 circulation flagship magazine and into various outreach programs aimed at schools and such recognitions as the Pierre Berton prize.

In a note to readers, publisher Deborah Morrison says:

Over the past several years the case for making the name change has grown progressively more persuasive. Increasing numbers of readers have written in support of it, vigilant spam filters have impeded our ability to use the old name in new media applications, and market research has born out unequivocally that the old name has deterred sales of new subscription and single copies particularly among women and readers under 45.

(For those of you who are interested in the data: in a study conducted last Spring it was determined that with The Beaver name, Canadians were twice as likely NOT to subscribe simply because of the title. We didn’t rely solely on surveys, we then tested these results further by sampling all our promotions with a name test – those results reinforced the survey, generating an average lift in response rates of between 25-33%.)

Our continued success depends on having a clear identity, as we aim to realign ourselves as multi-media content producers, and as we reach out to new audiences both online and with expanded newsstand distribution both in Canada and the US.


[The cover shown is an overlay of the new logo on the cover image of the February-March issue, which some subscribers will be receiving soon.]

A sensible decision and may it be greeted equally sensibly with no false nostalgia. What matters most is that a great and venerable magazine will continue to deliver the same great and valuable stories it has been bringing us of our past for the last 90 years. A great way to look ahead even while its mandate is to look back.....

A sensible decision that was long overdue. The survey results were the final proof that the magazine would have a much better chance of growing its readership with a new name.

Maybe now it won't be so embarrassing to ask for it at the bookstore...

Yikes! We'll be losing one more phrase—like "half an hour later in Newfoundland"— that distinguishes us from all others, and replacing it with the extremely bland "Canada's History", which would make a much better subtitle than a title. Nothing evocative here, nothing that would make us want to delve into the mag, but that's so very Canadian, isn't it?

One of the things I love about circulation is that the numbers don't have an ego, a vested interest, or an axe to grind.

Plenty of professional market research has been conducted.

Soon, Canadian readers will get to vote with their wallets.

Like Ian, I strongly suspect that we will be seeing a spike in the circulation numbers very soon.