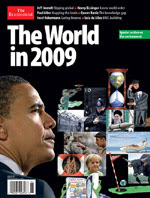 I was at Indigo today and was briefly fooled by this Economist look-alike by Adbusters. They were racked together in the Current Affairs section, with Zoomer between, so the consumer gets a pretty good side-by-side comparison. I wondered how Adbusters knew what the Economist was going to run, but I guess they were banking on the design being similar to the 2009 issue, or the Economist special issue's been out long enough that Adbusters could see it before going into production.

Apparently this is not the first time that Adbusters has had an Economist lookalike cover; it happened in 2006 as well.