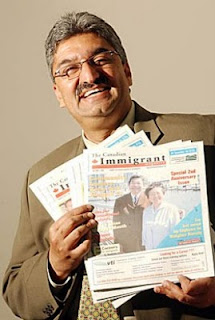 The founder of Canadian Immigrant Magazine, Nick Noorani, has resigned as its publisher, according to a story on Masthead. When he started publishing it out of his home in B. C. seven years ago, Noorani had a circulation of 7,000. Now, after being acquired by Torstar, which launched a Toronto version, it distributes 82,000 copies.

“The magazine has reached a height I couldn’t dream of when I started out,” he says. “I want to go and do more to help with immigrants to Canada.”