Massey College to hold an informal gathering for journalists 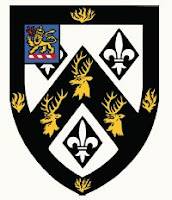 Massey College at the University of Toronto, which has long associations with journalists as fellows and Quadrangle Society members, is holding a Press Club Night, the first of what it hopes will be a series of relaxed and informal evenings devoted to celebrating Toronto's community of journalists.
The evening all-comers event (no RSVP required) is being held in the Upper Library at Massey, 4 Devonshire Place in the University of Toronto, starting at 7:30 p.m., Wednesday, November 17.

"The idea for the Press Club is simple and, admittedly, old-fashioned -- to provide a relaxed space for journalists and students to gather and chat. [says the announcement]"

Massey is presided over by its master, John Fraser, himself a journalist who was previously an editor of Saturday Night magazine. And the evening will feature Fraser in conversation with Globe and Mail writer Michael Valpy, a discussion keying off the 1989 assertion by writer Janet Malcom in her book The Journalist and the Murderer:

"Every journalist who is not too stupid or too full of himself to notice what is going on knows that what he does is morally indefensible. He is a kind of confidence man, preying on people's vanity, ignorance or loneliness, gaining their trust and betraying them without remorse. Like the credulous widow who wakes up one day to find the charming young man and all her savings gone, so the consenting subject of a piece of nonfiction learns -- when the article or book appears -- his hard lesson. Journalists justify their treachery in various ways according to their temperaments. The more pompous talk about freedom of speech and "the public's right to know"; the least talented talk about Art; the seemliest murmur about earning a living."

The talk and Q & A, will be followed by coffee, tea, cheese and a cash bar in the common room.

This does sound intriguing, and U of T is a nice place. Thanks for sharing!

This sounds not “intriguing” but like an excruciating exercise. Who the hell wants to watch aged sinecurists debate a useless theoretical point?

The future of Canadian journalism is billion-dollar printing presses, is it not? And John Fraser and Michael Valpy shooting the shit?