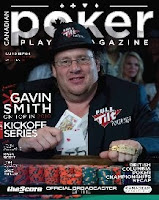 "Management believes that this additional offering will increase the number of readers of the magazine by over 800% thereby substantially increasing its value to sponsors and advertisers and exposing its marketing of CPT proprietary events and promotions to more players in Canada and internationally." [said a company release.] "Magazine revenues are expected to more than triple over the first 2 quarters of 2011 based on this expansion of the distribution model."

Canadian Poker Player Magazine is currently the exclusive magazine in 9 of the major poker rooms and casinos in Canada and the company says that number is anticipated to increase substantially through 2011.