Now, back to our usual lifestyle stories...article on goverment is a major departure for Saltscapes 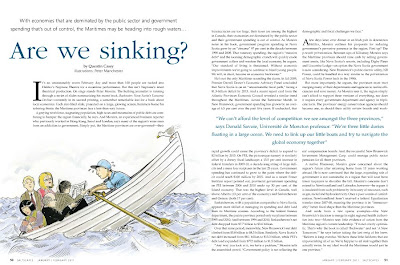 It's highly unusual for a lifestyles magazine to delve into public affairs, but in its January/February issue the east coast magazine Saltscapes takes the plunge with a tub-thumping article about the unsustainable cost of governent in the three Maritime provinces.The publishers, Linda and Jim Gourlay, acknowledge the disconnect, but make a case for the departure, saying in part:

"We know. We know! We're not a serious "hard news" publication, or a business publication -- we're a lifestyle publication and you have already told us you don't want "bad news" from us, because you get enough of that already."

The article, flagged by the coverline "Are we overgoverned?", is by Quentin Casey and headlined rather dramatically "Are we sinking?". It  answers by quoting extensively from the words and works of author Peter Moreira and studies from the Fraser Institute. While I'm sceptical of Fraser Institute's ideologically driven agenda, the data is alarming -- an aging population and three of everything governing a relatively small region.
There is a review of the history of the concept of maritime union, though the article's thrust is that major savings can be had without going that far, through rationalization of agencies and departments.
The piece is written with some vigour, though countervailing views are not quite so well represented, making it more of a polemic than a balanced presentation.
Perhaps the fact that the publishers of Saltscapes felt compelled to go against type may be a signal of how alarmed thoughtful people like them are at the prospects.
To read the article, which is not available on the magazine's website, you'll have to buy the magazine at a newsstand or buy a digital single copy through the Magazines Canada/Zinio digital newsstand.

ironic...the one time they could have brought readers in who don't normally care about their mag...they put it behind a paywall.

niche magazines need all the attention they can get...you gave them some...and they have missed this opportunity.

I know, I know...some of you will scream at me for this...people have to PAY for content.

But this was a golden opportunity...

Meh... Like the publishers said - this kind of story can be found in a lot of places. I doubt many people were tripping over themselves to read the piece.

Anonymous 2: If you feel that's the case, it's curious you went to the bother of making the comment.