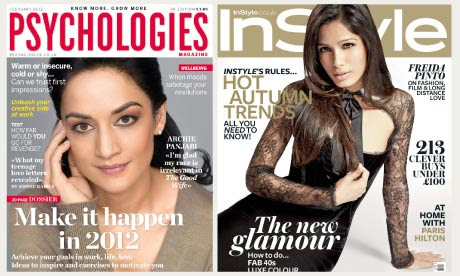 It would be interesting to hear if readers are noting a trend among Canadian magazines to put more diverse faces on their covers. I'm asking because of an article in the Guardian's women's blog noting that, in Britain, a lot of attention is being paid because of cover choices being made by mainstream magazines. For instance, British-born Indian actress Archie Panjabi on Psychologies (above, left) and Freda Pinto on InStyle.

Despite the current vogue for magazines using more racially diverse stars, Asian faces on the newsstand are still a rarity. "We've seen in the past how publishers were reluctant to feature ethnic faces on their magazine covers because they felt it might affect sales," says Anjana Gosai, an expert on Asian beauty. "It's encouraging to see more black and Asian women on mainstream magazines. However, we have a long way to go before this becomes the norm."

The article's author, Anita Chaudhuri, wonders whether such changes matter.

But why does the ethnicity of the faces that greet us on the newsstand matter anyway? Because if, like me and like countless others, you grew up avidly consuming magazines but rarely seeing anyone of the same race or colour, it has a corrosive effect. The pleasure of magazines has always been about a certain deluded aspiration – the "you, but better" philosophy. If we are finally moving away from "you, but white..", that really will give women cause for celebration.