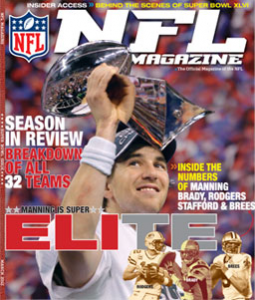 [This post has been updated] After only four issues. the National Football League is ending its business relationship with the Dauphin Media Group, according to a story from Ad Age, (which credited Sports Business Journal with breaking the news.)


Subscriptions and ad support weren't the problem, according to spokesman [for the NFL], who said the league might revisit a magazine of its own in the future. "The magazine was well received by fans," he said. "It was clear to us that it was a viable product."
Dauphin did not respond to an email inquiry on deadline. A voicemail box at its main number was not accepting messages.

The league said it might do a magazine of its own in the future.
As readers of this blog will know, this is not the first time Dauphin has had a rocky relationship with partners (see Related posts, below). An item in the New York Post reports that  Dauphin's New York office has closed and that CEO Mike Dunphy, after protesting that everything was fine, is no longer returning phone calls.
Related posts:

What goes around comes around.