Anti-spam rules may have reduced use of email, but not spam, report says

Canada's anti-spam law (CASL), which has been a major burden -- not to say a threat to the businesse -- for magazine publishers, may have had the paradoxical effect of reducing the use of email and actually increasing spam messages, according to data from the network security firm Cloudmark. It was summarized in a blog post by Keith Rose of law firm McCarthy Tétrault LLP. The consequences of CASL may not be what the government intended when it was imposed (as publishers had warned.) 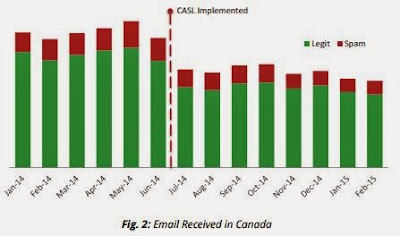 "Average monthly email volumes received by Cloudmark customers in Canada declined by 29%, but the percentage of received email that Cloudmark assessed as “spam” actually increased, albeit by an insignificant amount (from 16.5% to 16.6%). In other words, the proportionate impact of the legislation for Canadian recipients has been as high or higher on “legitimate” traffic as it has been on true “spam”.

"The implication appears to be that some Canadian organizations are abandoning email as a public communication platform instead of attempting to comply with CASL’s stringent consent and content requirements and facing the risk of substantial penalties for non-compliance. [For reference, see previous posts on CASL compliance issues here, here, here, here, and here.] One might wonder whether that was the outcome hoped for, from a law which states its purpose as being to promote the legitimate use of electronic means to carry out commercial activity.

"CASL does seem to be having a greater impact on Canadian spam aimed at other countries. Cloudmark’s data indicates that outbound international spam traffic declined by 37%. The report does not suggest any reason for the disproportionate impact on foreign traffic."