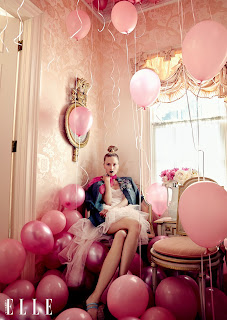 ELLE  Canada is publishing its largest-ever fashion shoot in the September issue -- on newsstands August 10 --  a 20-page spread of photos that involved more than 350 looks and accessories.


"It was definitely the most complex editorial I've done so far," said Juliana Schiavinatto, the executive fashion editor-at-large. "I wanted to ensure it looked current, yet still whimsical and timeless. My goal was to create something magical, cool and relevant. We embraced the Alice in Wonderland mantra: "We're all mad here!" and went for it."

The issue features a virtual reality cover shoot, done 3D in collaboration with Canadian tech startup PCP VR of Toronto. Jacqueline Loch, VP & group publisher, TVA Group said “We know our readers are early tech adopters, and we are giving them more of what they want: from live cover shoots driven by social media to shoppable videos on mobile and, now, a virtual-reality September cover.”
Tweet