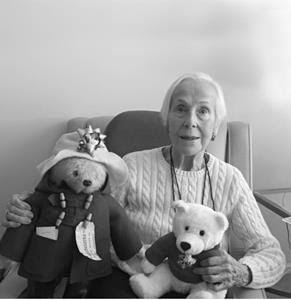 I always recall being fact-checked by Prue Hemelrijk, who would say over the phone that she had "a few teeny, tiny questions"; forty minutes later, you'd have a much better (and more accurate) story and could collapse in a heap.

Prue -- who died October 1 in Victoria at the age of 90, according to a death notice in the Globe and Mail -- was a true original, the doyenne of copy editors and fact-checkers in the magazine industry during what might be recalled as its golden years.


She had been a copy editor at Maclean's , working for then managing editor Pierre Berton, and worked as an editorial assistant to Peter C. Newman.  She also worked at Chatelaine  and at The Canadian weekend supplement and did freelance work for a number of titles such as the Financial Post magazine, Toronto Star, Toronto Life, Saturday Night, enRoute and Canadian Art. Yet copy editing or editorial work was not what she had started out to do; she was a pianist trained at the Royal Academy of Music in Londonwhen she emigrated from Britain [I  would have received one of her spidery marginal notes pointing out that you emigrated to but immigrated from] and arrived in Canada in 1955.

[Here was an excellent 2010 story in the Ryerson Review of Journalism, with much more detail about Prue and about facts about fact-checking http://rrj.ca/off-the-rails/]

I first came to know her when I joined The City magazine at the Sunday Toronto Star in the mid-70s. She was so much fun, with a combination of the prim 'n' proper and a sly sense of humour. Her precision and prodigious memory was a gift to writers and editors alike.

I recall she told people straight-faced that she housecleaned in the nude because she didn't like to get her clothes dirty. And how she read every word of every issue of The Globe and Mail from cover to cover, reportedly from back to front -- and apparently retained everything she read for use in winkling out later errors in stories. She was a devotee of Gramophone magazine.
She retired at the age of 70 and moved to Victoria. Music remained central to her life; she took up playing the cello at 79.


When the late Charles Oberdorf and I were promoting a scheme at the National Magazine Awards to recognize excellence in people who were more or less "behind the scenes" of the usually recognized 'makers' in the business, the first person we thought of -- and who was subsequently to receive the Foundation Award for Outstanding Achievement -- was Prue.  She became the first recipient of this high honour in 1990.

A memorial service will be held at 11 a.m. on Friday, November 3 at Christ Church Cathedral in Victoria and in lieu of flowers donations could be made to Christ Church Music Endowment Fund.