Could selected magazines be "vended" to travellers?

Since there now is a book vending machine at Billy Bishop airport on Toronto Islands, could we be too far away from a vending machine for some of Canada's best magazines? For instance, winners at the National Magazine Awards.

According to a story in the Toronto Star, there are 20 independent titles available in the machine put in place by Literary Press Group, a collective of about 60 independent Canadian publishers. Carry On Books is a summer-long experiment running from June 1 to Aug. 31. The project was funded by the Canada Book Fund, which is part of the federal Department of Heritage.


Inspiration for the machine came in part from the Biblio-Mat at The Monkey’s Paw bookshop on Bloor St. W., which provides used books, as well as short story machines in Edmonton and Paris airports that dispense a story for those in need of a quick read.

“We thought Billy Bishop was the best place to launch a book vending machine because there’s no real entertainment options on the flight,” noted Thomas. “We often see passengers reading the literature on the plane,” [said Christen Thomas, the organization’s executive director.]

The Deep, Hakai and The Globe win general excellence in 2018 Digital Publishing Awards

The awards for general excellence in digital publishing at the Digital Publishing Awards have been made to The Deep (small circulation), Hakai Magazine (medium) and The Globe and Mail (large). The awards were presented Tuesday night by the National Media Awards Foundation, which also presents the National Magazine Awards (this Friday).

Of The Deep, the judges said:


"They’re doing remarkable work with a very small staff, using their resources intelligently so that each story has the greatest impact. Their mandate—to tell in depth stories based on the East Coast—feels not only necessary, especially with the erosion of local news, but like one that they are well-positioned to carry out, considering their balance of a considered design with engaging stories,” remarked the digital publishing awards jury. “As traditional publishers grapple with diminished capacity, it will take efforts like those of The Deep, to ensure deeper, longer stories are still told and more importantly, heard!”

Of Hakai, the judges remarks were:


“Hakai is the realization of what a great digital magazine can be. With beautiful imagery, clean design, crisp writing, and well-integrated digital features, Hakai sets the standard for a high-quality digital publication,” said the Digital Publishing Awards jury. “Everything about the site is in support of its content and the reader, as it should be.” Hakai Magazine received six other awards in various categories, including a second gold in Best Online Video - Feature.

Of The Globe and Mail, it was said:


“The Globe and Mail team produced an extremely innovative body of work. Their editorial mandate was not only fulfilled, it was surpassed and truly represented the highest of journalistic standards.”  The Globe won gold for best digital design.

Elizabeth Melito of CBC News was recognized as this year’s recipient of the Emerging Excellence Award. The award honours an individual whose early work in Canadian digital publishing shows the highest degree of craft and promise. The jury said they were


“exceptionally impressed by Elizabeth's clear demonstration of leadership and initiative in a large and respected organization like CBC News. She joined CBC News, her first media job, in 2015. In a short time she has earned a high level of respect and responsibility and has developed two custom long-form development tools that have been rolled out nationally at CBC.”

Brodie Fenlon, the Senior Director of Daily News and Bureaus for the CBC, was the recipient of the 2018 Digital Publishing Leadership Award. The award honours an individual whose career contributions to Canadian digital publishing deserve recognition and celebration.

Highlights of other winners:
To view the winners in all 23 categories live.digitalpublishingawards.ca. Follow the Digital Publishing Awards on Twitter @DPAwards and #DPA18. [Also, a complete list of the results are after the break below]

Now, Rob and Amanda Soulodre are the owners and publishers and have moved the quarterly magazine down the road (but not that far) to their farm in Alvena, Saskatchewan. The couple are also the publishers of Saskatoon HOME magazine.


"Lionel & Michelle have spent 20 years cultivating, curating and covering the pulse of Saskatchewan’s natural beauty and the stories of its people. I’m sure we speak for you all when we say “Thank You!” to Lionel and Michelle for sharing their love of Saskatchewan with us over these many years," said a post about the ownership change.

"We take the continuation of this legacy very seriously, and look forward to the next 20 years of sharing our love for Saskatchewan with you. The natural beauty and spirit of our people is something we feel in our soul. Thank you for inviting us into your lives, we know we are going to get along splendidly in true Saskatchewan fashion." 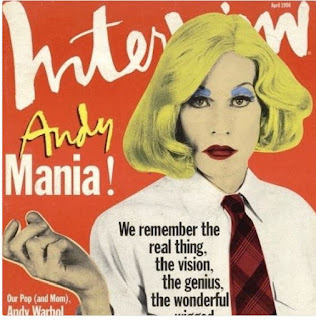 Interview magazine, which was founded in 1969 by artist and pop-culture leader Andy Warhol, has folded. It filed for Chapter 7 bankruptcy on Monday and immediately discontinued its print and posted online content.

"Fans of the magazine immediately spoke out in disappointment, as the publication served as a cultural beacon on the intersections of the art, fashion and celebrity for decades [said People].

Although it wasn't likely the only reason, the magazine was sued for $600,000 earlier this months by former editorial director who claimed he wasn't paid by the magazine.

Coast to Coast Newsstand Services Partnership (CTC) -- one of the best known distributors of Canadian and U.S. magazines in the Canadian market -- is to be bought by the Comag Marketing Group PLC, a Princeton, New Jersey-based retail magazine sales and marketing company effective January 1.  Comag is a subsidiary of The Jim Pattison Group of Vancouver,


“I’m disappointed that CTC will not be carrying on after January 1, 2019" [said Dan Shapiro, Managing Director of CTC a release published on Mastheadonline.com] "but am gratified that our clients will continue to receive expert quality service through CMGC. Continuous sales declines throughout our entire eco system put the sustainability of CTC in jeopardy.”

Glenn Morgan, President of CTC, will continue in his role after the acquisition,

Coast to Coast is a partnership between Rogers Communications and a group of major Canadian magazine wholesalers. Originally owned by Maclean-Hunter, primarily to distribute its own magazines, CTC was purchased by Rogers Media in 1994 and in 2000, a majority interest was sold to three industry veterans, Glenn Morgan, Frank Auddino, and Scott Bullock. In 2005, majority interest in the company was purchased by a consortium of the major periodical wholesalers in Canada.

In 2013, Coast to Coast outsourced most of its back-office accounting to Comag to handle all billing and collection, print order and galley preparation as well as other administrative functions.

A new venture has been launched under the auspices of media auditing firm BPA Worldwide to allow for automatic buying of print media ads on behalf member publishers and to the benefit of their clients.

In other words it allows for "offline" media buying, including print, e-letters, directory ads and other products in addition to the usual online digital ads. It expands the B2B Media Exchange which was earlier launched by BPAWW and is the result of a collaboration between BPA and Paris-based Adwanted.com. (See story presented in Publishing Executive.)

Publishers are able to offer advertisers the entire buying process, including media insertion orders, terms and conditions -- in fact the entire menu of services to clients -- only expanded to include traditional print products. Similar automated services are being offered in Europe at Lagardere (Elle, Paris Match, etc.), Group Marie Claire (Marie Claire, Cosmopolitan), Mondadori (Grazia, Auto Plus), as well as Le Monde and Les Echos.

The Canadian Online Publishing Awards (COPAs) has announced the categories for its 10th anniversary  -- 20 categories in each division with 15 categories each, with the exception of students/schools, which has five (see below; click on each item to enlarge)

In celebration of the10th Anniversary the COPAs are rolling back the entries fees to when they first started. The entry fee this year is $95 down from $115 and the early bird is $75 down from $95. All independent publishers pay only $75. Schools get one free entry. 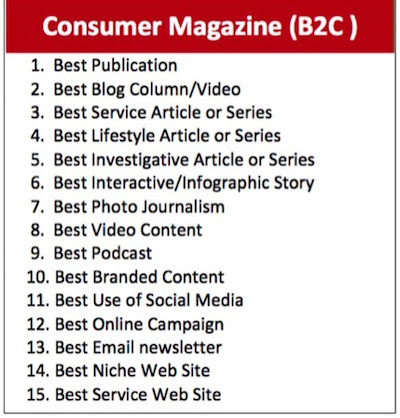 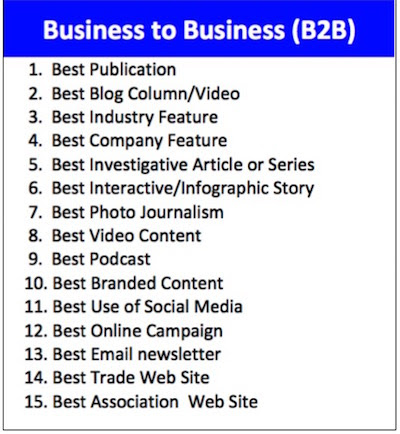 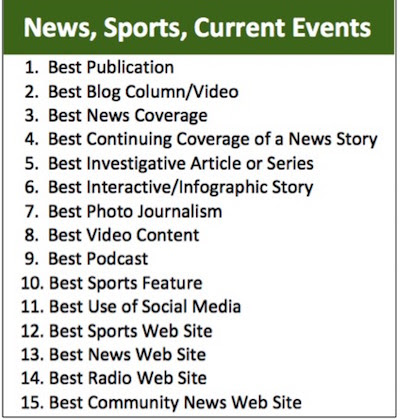 Though there was a decline in operating revenues in the magazine division of TVA Group Inc. it has been able to have good, though modest,adjusted operating income of $875,000 , a variance of $491,000 primarily as a result of savings in staff and expense lines implemented in 2017 and the first quarter of 2018.


"Although the decline in our Magazines segment's operating revenues continued in the first quarter of 2018, we were able to improve the segment's financial results by continuing our efforts to cut operating expenses and focusing on our strongest brands. According to the latest Vividata survey, we are reaching 9.1 million readers in Canada across all platforms. Our English‑language titles have 6.7 million readers and our French‑language titles 2.9 million".

Over all, TVA Group Inc. recorded a net loss of $5 million or $0.12 a share in the first quarter, compared to a lost of $8 million or $0.19 a share in the comparable period in 2017. TVA Group Inc., a subsidiary of Quebecor Media Inc., is a communications company engaged in the broadcasting, film and audiovisual production, and magazine publishing industries. TVA Group Inc. is North America's largest broadcaster of French‑language entertainment, information and public affairs programming and one of the largest private‑sector producers of French‑language content. It is also the largest publisher of French‑language magazines and publishes some of the most popular English‑language titles in Canada. The Corporation's Class B shares are listed on the Toronto Stock Exchange under the ticker symbol TVA.B. 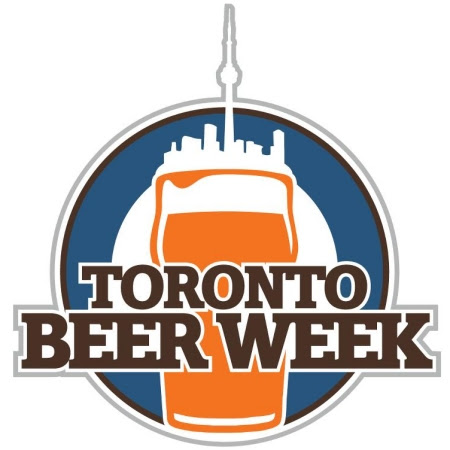 St. Joseph Media has acquired the ownership of the 9-day Toronto Beer Week event. A posting on Canadian Beer News says St. Joseph will be expanding an existing annual program publication into the Toronto Beer Guide “a year-round magazine-style publication that includes relevant, evergreen content in addition to being a companion to the event.”
year-round .

The beer week festival will hold its 9th annual edition on September 14th to 22nd, 2018. The event was founded in 2010 by a group of local beer fans and has grown to include a variety of beer-themed events: pub crawls, beer dinners, tap takeovers, meet the brewers sessions, beer releases and associated food and cheese pairings.

The finalists for this year's National Magazine Awards have been announced by the National Media Awards Foundation. 197 Canadian magazine, in English and French, print and digital, submitted the work of more than 2,000 writers, editors, photographers, iullustrators, art directors and other creators. The winners will be announced at the Magawards gala on June 1 at the Arcadian Court in Toronto. 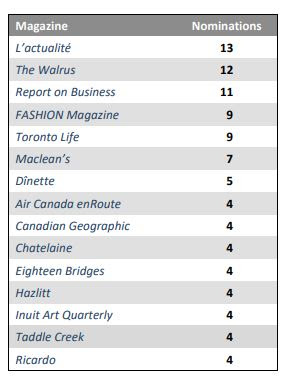 Joyce Byrne is this year's recipient of the Foundation Award for Outstanding Achievement, recognizing her career excellence and leadership in Canadian magazines. She is the current president of the Alberta Magazine Publishers Association and recent president of the National Media Awards Foundation. She is group publisher at Red Point Media and publisher of Avenue Calgary.  To read Joyce’s complete bio, visit magazine-awards.com/oa.

Nominated by 150 volunteer judges were a total of 208 submissions from 81 different Canadian magazines for awards in 29 written and visual, editorial and best magazine categories.

This year, for the first time, awards for best magazines will be presented to publications in six divisions and from the category winners will be selected "best in show" to receive the Magazine Grand Prix.