There's a new kid's book on the block and it looks like fun. Aimed at 7 - 11 year olds, and published by Canada's National History Society, Kayak: Canada's History Magazine for Kids is short on ads (not the idea, mind you) but long on corny kids' comedy and the most soft-pedalled sort of instruction. [Click on the headline to go to the Kayak website.]

CNHS also publishes a history magazine for adults that suffers from the unfortunate name The Beaver; while it is a long-established brand name, it never fails to elicit a snicker from even the most serious magazine maven. The publisher of both is also the president and CEO of the Society, Deborah Morrison.

The premier issue contained one, paid ad from TD Canada Trust. The second no ads at all, save for what are probably swaps with Historica. TD Bank Financial Group sponsors distribution of the issue. But, you know, maybe this is an example of a magazine that could stay off the ad merry-go-round. At $21.95 for 6 issues plus a bonus (total 7), and despite the colour-heavy design, it would be nice to think that children could be spared the kind of blizzard of advertising that is such a mixed blessing for adult magazines. 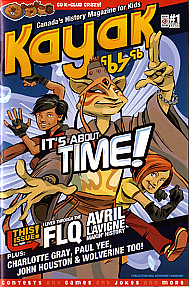 New kid on the block for kids. Kayak #1.

Vol. 1, no. 2, the Feb/March issue, has some very interesting stuff. For instance, it tells the reader all about the new $20 bill and some of it is surprising. Did you know the $20 celebrates arts and culture? (It has a Bill Reid sculpture on the back and a block of text that says "Could we ever know each other in the slightest without the arts?") The $50 celebrates nation building? And the $100, exploration and innovation. Somehow I missed that.

There's some dubious cross-marketing between The Beaver and Kayak, but who knows? Maybe Mom and Dad will come across it while reading a profile of Jim Carrey, or the latest episode in the K-Club Gang's adventures.