Spacing mixes it up for municipal election 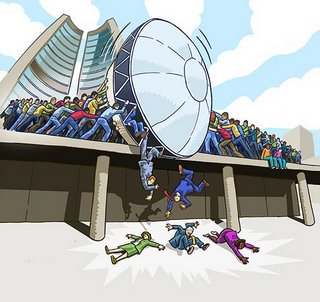 Spacing, the prize-winning little Toronto magazine, run part-time by Matthew Blackett and a bunch of dedicated urbanophiles, certainly punches well above its weight when it comes to participating in the forthcoming municipal election in Canada's largest city.

We like the illustration they used by artist Mark Ngui (see above). Spacing's new issue, due out September 18, will concentrate on the topics that it feels City Hall should make its top priorities, and it has a report card on the councillors ("we identify the star pupils and problem children"). It will have a launch party, as usual at the Gladstone Hotel (Queen and Dufferin) on Thursday, September 28 (doors open around 8pm). $10 gets you in and a magazine.