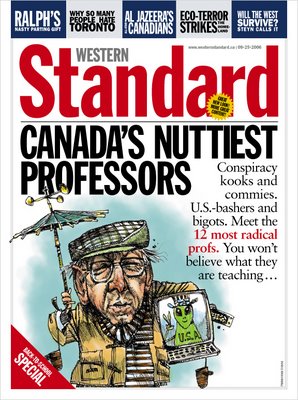 The Western Standard of Calgary has gone to one of Canada's most reliable and steady art direction hands, Jim Ireland & Associates, to help it redesign the newsmagazine from front to back. The whole new look will hit the newsstands with the September 25 issue. Here is a sneak peek.

Gone is the blocky red logo box up in the corner, replaced with a bold upper and lower logo emphasizing the word "standard". A series of skybar boxes pitch 5 stories hard, at least in the cover we've seen. As will be evident, the cover subject has lost none of the edge for which the Standard is well known.

James Ireland & Associates of Toronto has handled the ongoing design and the redesign of many of Canada's better magazines (Ireland has been a longtime friend of the Ryerson Review of Journalism), including the U of T magazine, Rotunda, the Imperial Oil Review and so on. In 1997, Jim received the lifetime achievement award from the National Magazine Awards Foundation.

The Standard has a claimed circulation of 40,000, including about 18,000 subscribers.

The first issue of the new look should probably sell a good many copies to Torontonians who are always up for knowing why everyone everywhere else hates them!
Tweet