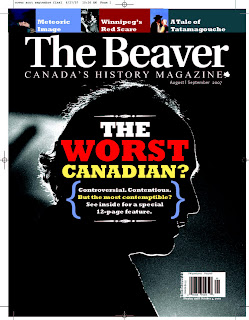 Sometimes a promotion backfires, and it certainly seems to have done so for The Beaver: Canada's National History Magazine. Their lighthearted contest (unabashadley undertaken as an audience- building and attention-getting device) to find a list of the top 10 "Worst Canadians", was apparently hijacked.

How else to explain that a venture that expected to find utter scoundrels from throughout Canadian history resulted in readers voting former Prime Minister Pierre Trudeau number one, well ahead of serial killers Paul Bernardo and Karla Homolka. And musician Chris Hannah managed in his publicity campaign to get his fans to write him in, coming just behind Trudeau. Anti-abortion campaigners clearly seized the opportunity to write in Dr. Henry Morgentaler high up on the list.

The sound of axes grinding is almost deafening.

Of the 15,000 write-in, online "people's choice" votes, the top 10 included four prime ministers (two Liberal and two Conservative). Here's the list:
The actual tally and profiles of the top 10 are available only in the print issue, on newsstands and delivered to subscribers today.

By stark contrast to the write-in votes, a panel of 10 eminent historians picked a much different list; although it, too, contained prime ministers:

, editor of The Beaver noted “voters generally disliked Canadians who – in their view – turned their backs on by rejecting their citizenship or moving elsewhere to seek fame and fortune. Voters also disliked Canadians who – they believed – sold out our sports teams, businesses, or cultural institutions to foreign interests, thereby diminishing our collective national identity.”

A story in yesterday's Toronto Star, said the whole idea of the contest did not go down well with everyone, particularly Rudyard Griffiths, the co-founder of the Dominion Institute, a foundation devoted to promoting and celebrating Canadian history.

"In typical Canadian fashion, given the opportunity to put on the proverbial hair shirt, we've seized it....I'm sure there's no shortage of incompetent and venal acts throughout Canadian history, but what does this really accomplish?"

Its sorry to say that the idea comes from the previous editor Doug Whiteway without giving precise boundaries for voting on the web and that he took the idea from last year BBC history magazine.

I don't know why some people are so surprised with the responses on the list. Given that the extent of my knowledge on this particular topic is the content of the blog, I can completely understand why these names made it to the list. I think it speaks to the sentiment that most Canadians have.

It's clearly understood that it is sacrilege to do anything short of extol the virtues of Trudeau, but we can't turn a blind eye to his legacy of "distinct society", grey areas of the charter and "notwithstanding"?

Generally speaking, our nation's broad political spectrum speaks to the dislike of our most recent prime ministers (how did Martin escape the list?).

As for the others, Mark Reid is on the money on identifying our distaste for high profile ex-pats.

Now both the third Greatest Canadian and the worst; the people have spoken. Twice.

i would like to say that mark reid herited what the previous editor doug whiteway left him with this contest and that saying that he is there for some money is very unproffesional to affirm this.

Well, yeah, Trudy was up there for sure.

You assume it was hijacked because Trudeau won? I would have voted for him, but I thought Michael Bryant was slightly more deserving.

Thanks for keeping folks aware of The Beaver. The magazine is taking risks, which are being rewarded at the newsstand and with climbing renewal rates. The newsstand draw for this particular issue is an all-time high of over 8,200 copies. And it is being promoted more aggressively than any issue in our 86 year history. HDS Retail has backed it with their Power Pocket Promotion, for which we are grateful. The Beaver recently won Best Cover Mid-Size Magazine at the 2007 National Newsstand Awards. Our sales are up, our sell-through efficency is up, our cover price is up. This magazine has proven that history can be both thought-provoking and fun, when you tell Canada's stories. And in the new interactive world we live in, both the CBC and The Beaver, are finding new ways to engage their audiences. I'll keep you posted as the sales results roll in over the next 3 months.

First, the obvious: The comment above said Mark Reid was “on the money,” which means he was accurate and correct in his comments. It does not mean he was there “for” the money.

Next, from what I know of Mark, he is both competent and bright. I have little doubt he will do well at The Beaver.

However, the bulk of the content for this issue was the result of the work of previous editorial staff. Mark has yet to put out an entire issue from scratch. It will take several of these before a trend can be determined as to the quality of the publication. So to say that it is “doing much better” since Doug Whiteway left is both incorrect and unfair.

And three words: capitalization, punctuation, and spelling. Think about it.

Thanks to all for keeping the conversation going.

To set the record straight, Doug Whiteway came up with the terrific idea of developing a Worst Canadians feature to entice people to take another look at Canada's history. He also commissioned much of the initial content.

The decision to expand to include an online component to encourage online visitors and non-subscribers to get involved in the conversation was a joint one, but much of that took flight after Doug's departure. Indeed, Mark's first day at work was the day the online poll opened in May.

The final editorial packaging, editing, and integretion of the unprecedented public response was incoming editor Mark Reid's to manage.

Everyone knows how difficult transitions can be. In this case, the magazine came out on time, on budget, with the biggest newsstand draw in our history. This speaks to the professionalism and passion of all of the staff involved from beginning to end in its realisation.

We all inherit our history. The opportunity to learn and grow from it is the resulting gift we receive. This issue will continue to be a growing experience for all of us in many ways. Both editors share the credit for a challenging assignment well executed.

As always, now we wait to hear what the readers have to say.

I am not sure about the Worst Canadian but I do know that Scott Bullock knows circulation kung fu....so don't be messin' with him!

In this situation, however, perhaps we could refrain from teasing the quite possibly non-Anglophone art director, mmmm?