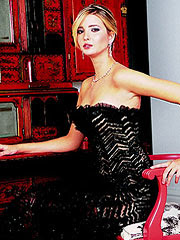 It was said by some wag that George Bush was born on third base and thought he'd hit a triple. I was reminded by the Hello! magazine top 10 list of North American heiresses. As hard as the magazine tries to justify this ("While they may have been born into a world of privilege, these ambitious ladies are building their own roads to success.") the preview of this selection of silver spooners (out tomorrow) manages to remove what little sympathy you might have for someone whose position owes everything to a) being born to a privileged family and b) having two x chromosomes. Twenty-five-year-old Ivanka Trump says of a line of jewellery that bears her name: "It's important to control your destiny and this jewellery isn't meant for people who don't."
Tweet