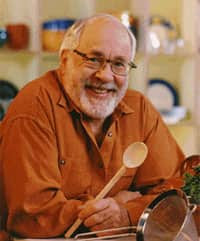 James Barber, the cook and raconteur who was a regular contributor to Western Living magazine and Vancouver magazine in the '80s and '90s, has died of natural causes at his home on Vancouver Island at the age of 84, according to CBC.ca.

Although he was a magazine writer and author of a dozen cookbooks, he was perhaps best known as a chef on television and his program The Urban Peasant appeared on CBC-TV for 10 years. It was syndicated to 120 countries around the world.

His wife Christina Burridge said her husband died as he would have wanted, seated at his own kitchen table with a pot of soup simmering on the stove.

The 84-year-old food enthusiast lived his final years on a four-hectare farm in Cowichan Valley on Vancouver Island, where he bred miniature donkeys and tended to his fruits and vegetables.

Barber's last book, One Pot Wonders, was released in July.

Barber was an effusive cook who eschewed the snobbery and gourmet trappings of the world of food. Friend and food journalist Don Genova says Barber helped make cooking accessible."Through his TV shows, especially The Urban Peasant, he showed that you didn't need fancy ingredients, you didn't need fancy knife skills. You could just do it," notes Genova."His cookbooks were exactly the same. They were meant to get people back into the kitchen."

Upon the republication earlier this year of his cookbook for couples, Cooking For Two, Barber told the Georgia Straight , "This is not a book for Barbara Amiel," he surmised in reference to the well-known luxury tastes of the writer and wife of former newspaper baron Conrad Black.

"I teach people that in the winter you eat a lot of cabbage because it's cheap."

Barber had also served as president of a Vancouver immigrant society, MOSAIC, a non-profit organization that addresses issues affecting immigrants and refugees, and the Vancouver Folk Music Festival Society.