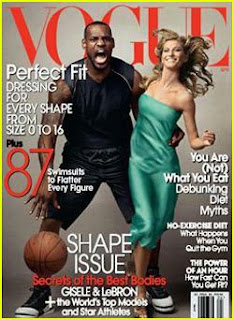 Some controversy is afoot over the latest Vogue magazine cover featuring basketball superstar LeBron James and supermodel Gisele Bundchen, particularly among African Americans, according to an item from Radar magazine.

While no one questions the historical importance of James' cover appearance—he's the first black man ever to be so featured—word in the black blogosphere is that the cover plays into the old stereotype of the black man as a savage in search of a prized white woman. Some have gone so far as to say it evokes the dreaded imagery of King Kong, and question the choice of photo when a less highly-charged alternative was available.

This week is Fashion Week in Toronto. Interesting that fashion bloggers and not mag editors were the commentators on CBC radio.

I'm interested in what Vogue's response is because the cover does portray savage imagery of black males. And it also perpetuates the stereotypical ideal of "perfect," white, blonde, helpless women who are happy to be rescued by men.

I'd jump to say Vogue should be immediately apologetic but it'll play out as a much better news story if they do some defending first.

So apparently, I'm the only person in my magazine class who feels this way. Everyone else said they thought the cover was fine and that other people were making a big deal out of nothing. One peer in particular was annoyed that instead of celebrating the fact that there is a black male on the cover for the first time, controversy has been created.

Another person thought because some people think it's "animalistic," it makes us seem like we're actually the ones who are more racist.

I still don't agree, although I understand what they're saying. I think this is a case of where we don't even realize that we're perpetuating stereotypes anymore. But I guess this discussion really belongs in a sociology class instead.