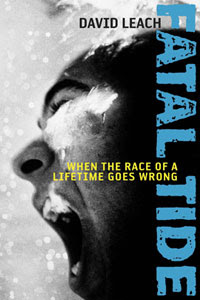 What was originally to be a brief, 400-word item in Explore magazine grew into a 7,500-word investigative piece which now has morphed into an 85,000 word book. Fatal Tide: When the Race of a Lifetime Goes Wrong by David Leach, former managing editor at Explore and ex-arts editor at Monday magazine, is being launched on Monday in Toronto.

It tells the story of the controversial Fundy Multi-Sport Race -- a triathlon of trail running, mountain biking and sea kayaking around and across the Bay of Fundy -- which turned from competitive adventure into tragedy, with an ocean storm resulting in the first death of an adventure racer in North America. Not only does it tell what happened in June 2002, but uses it as a framework to explore the psychology of risk taking in the outdoors, the contemporary culture of reality TV and extreme sports and the science and treatment of hypothermia. Its publishers, Viking Press, compare it with bestsellers such as Into the Wild and The Perfect Storm.

The investigative feature “Death by Adventure” was published in Explore in 2003 after six months of research. The book is the result of another five years of research into the facts of the event and also its implications for adventure sport.

Leach, who is now an assistant professor of writing at the University of Victoria, will be at the Harbord House pub in Toronto for a reading, Q&A, sale of copies and launch party for the book starting at 7 p.m., Monday, July 21.
Tweet